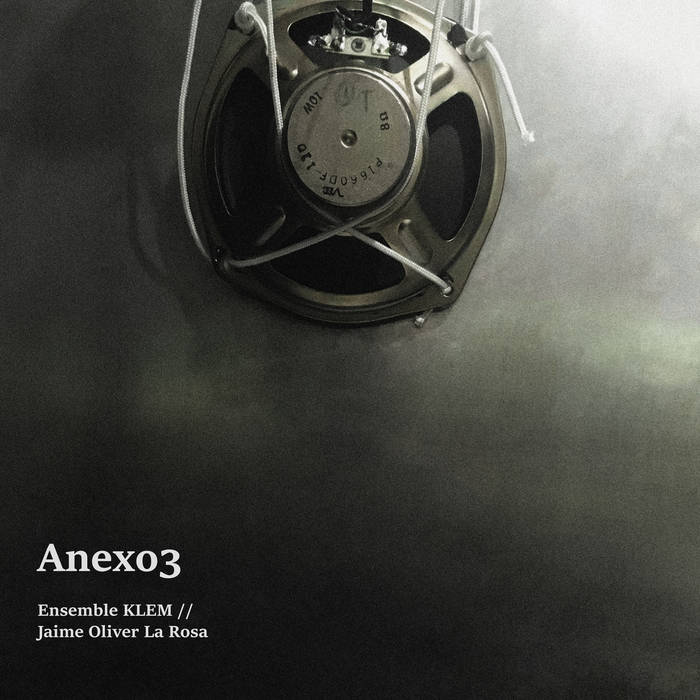 Anexo3 (2017-18) was composed by Jaime Oliver and Ensemble KLEM over residencies in Bilbao, Lima, and Santiago de Chile, through elaborated processes of sound design, experimentation, improvisation, recording, and reflection. Often processed beyond recognition, violin, flutes, and saxophones are performed along güiros, motors, and a system of aluminum plates, struck and induced into resonance through feedback processes controlled by microphones, transducers, and computer software and joined by Oliver’s MANO computer-based instrument. The sonic world of Anexo3 ranges from metallic sonorities of the instruments and the industrialized cities we worked in, the feedback systems we inhabited, and soundscapes of imaginary nature.

A forty minute structured improvisation, Anexo3 is partially notated with traditional music notation, graphic notation, text indications, and inscriptions on the instruments themselves. The work is also heavily encoded in a software that shapes the ensemble’s sound and the set of actions the musicians must make to control the temporal evolution of the piece.

As the second half of the work begins, the work requires three güiros in addition to the unprocessed instruments. It is unclear whether güiros, which consist of a notched gourd and a striker, were first constructed in Latin America or if they were introduced in Latin America from Africa. Today, they are used extensively in Afro-Latin popular musics. In Anexo3, musicians are required to play on their instruments with one hand while playing güiros with the other. Symbolically, this action embodies the duality between the Western practices that the violin or the flute materialize - and on which we were formally educated in - and the way in which the postcolonial condition has become encoded in the güiro itself and in the various musical practices around it. This section produces a delicate, fragile, and even uncomfortable performance situation, rendering a musical result located between Western and non-Western musical traditions, and not fully belonging to either of them (Jaime Oliver).