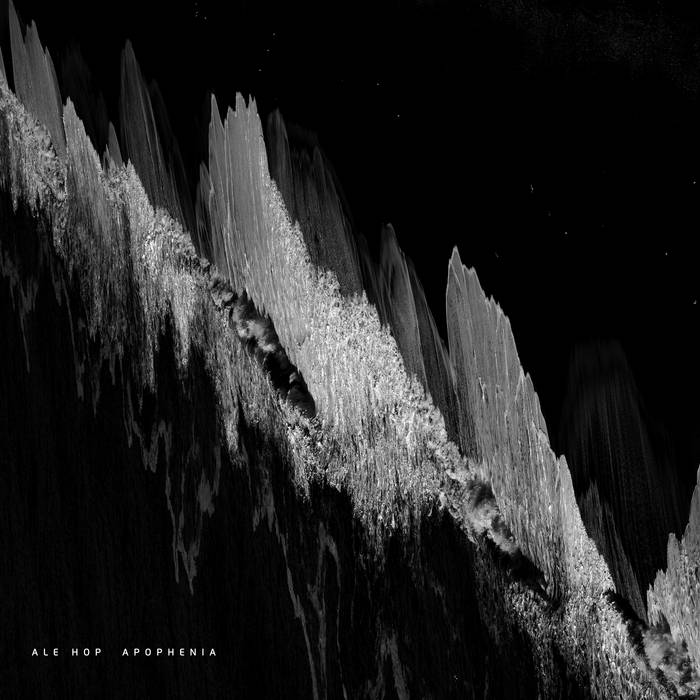 Ale Hop’s APOPHENIA suggests possible and reimagined South American geographies. Along with atomized field recordings and sound samples she recollected from video archives from her homeland, Peru, the composer interweaves unknown territories by mimicking mountains
and oceans, but also grey skies and violent cities, with droning and shrieking textures of electric guitars mixed with spoken chatters and sizzles. The LP is accompanied by two black and white images from the Peruvian photographer Gihan Tubbeh that withhold the same poetic nature of the music through visual rhyme s expressed on fragments of landscapes.

Ale Hop is a Berlin -based artist, researcher, and experimental instrumentist from Peru. She composes electronic music, by blending strains of noise, pop, avant-garde, ambient and a complex repertoire of extended techniques for electric guitar and real time sampling devices
which she uses as her sound vocabulary to craft a performance of astonishing physical intensity, saturated of layers of distortion and stunning atmospheres. Additionally, in her current A/V performance,
Ale Hop assembles soundscapes that are rela ted to the contradictory
memories she keeps from Peru, from the violence and turbulence which she grew up, in uncertain times in Lima, through contemplative territores.

All Music Composed, Recorded and Mixed by Ale Hop
Except Chord Progression of "Puñales" taken from Ulpiano Benitez's song "Puñales"
Cover and back cover Photos by Gihan Tubbeh
Mastered by Alberto Cendra in Garden Lab Audio