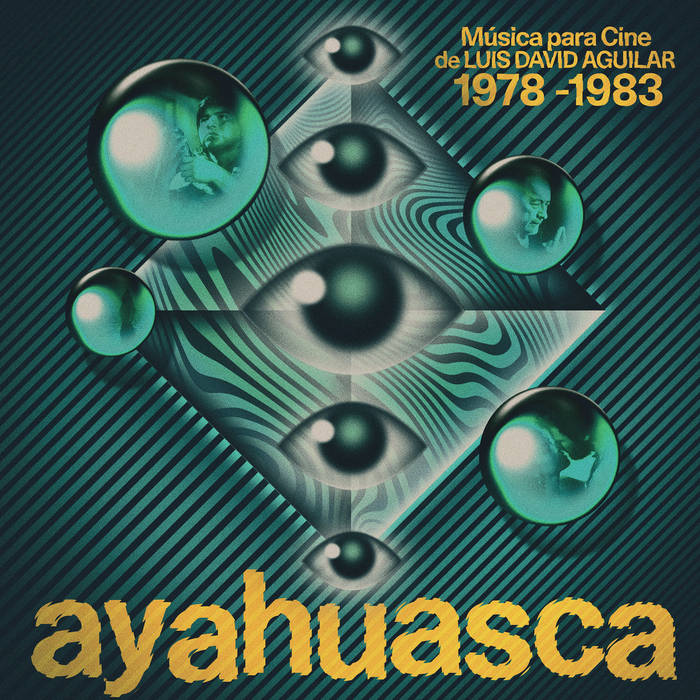 Ex-Friendly Astonishing soundtrack music from someone I've never heard of but is one of the greats of Peruvian film composition. Favorite track: El viento del Ayahuasca (1983).

Luis David Aguilar (Arequipa, 1950) occupies a fundamental place in the history of film music in Peru, not only because of the prolific nature of his work (which also includes music for television and advertising), but because of the singular, experimental style found in many of his scores. Aguilar's music blends modern academic composition with the use of native instruments, synthesizers, sound collages and a diversity of resources, which identify him as a key figure to understand a period of Peruvian music marked by the imprint of the avant-garde and the use of native sounds, which developed during the late 70's and the early 80's.

Aguilar belongs to the so called “Generation of the 70's”, along with Peruvian composers such as Walter Casas, Seiji Asato and Aurelio Tello, who were then immersed in the languages of contemporary classical music. But he also shares the spirit of renewal of a generation of musicians who came from the world of jazz and electronic experimentation such as Manongo Mujica and Arturo Ruiz del Pozo.

After his graduation from the National Music Conservatory, Luis David Aguilar studied at the Instituto Nacional de Teleducación, starting from 1976, which proved to be decisive. It allowed him to start a career as a composer of music for radio and television, and drove him away from the classical scene. With this experience in hand, he was then able to produce film music and to work in many recording studios in Lima. He also set up his own studio and, as a result, he is the owner of a large archive of recordings, which has been maintained without being published. “During those years I composed a lot of music: children's songs, jingles for various radio shows, as well as music for television series, etc.”, says Aguilar. “The great attraction for me was that all of the music I created was recorded immediately, and because of my academic training, I was able to write scores for symphonic orchestra. My purpose was to introduce the sounds of classical instruments in the auditory memory of a vast audience. I had never experienced this possibility before. As an academic composer, I created works that were rarely performed. Most of them gathered dust in different places or, because of my lack of order and frequent relocations, they simply got lost. But during this period, all of the music I wrote came to life. I was also able to work with different recording studios and use their fantastic technical resources. In addition, this situation allowed me to create job opportunities for classically trained musicians (who at that time were very poorly paid). Over any other consideration, this had a clear social function, and the experience was totally worthy for me. In large measure, this is why I stopped working in academic settings.”

Ayahuasca is an album that collects pieces from 1978 to 1983 and offers an overview of the different musical paths that Aguilar followed during his career as a soundtrack composer. The album opens with music from the film El viento del ayahuasca [The Wind of Ayahuasca] (1983), by director Nora de Izcue, performed by the National Symphony Orchestra and Choir of Cuba under the baton of Luis David Aguilar, with Chucho Valdés on piano. Recorded at the ICAIC studios (Cuba), it is an ambitious orchestral and vocal composition, in which you can hear the beginning of the famous melody popularized by the Amazonian cumbia group Juaneco y su Combo, which serves as an introduction to the sound world of the jungle, a dense and hypnotic atmosphere that, without a doubt, places this work as one of the most important compositions of the author's repertoire.

The next track is the music for the documentary Anónimo cotidiano [Anonymous Everyday] (1979), by director Jorge Rey, a unique experimental piece for synthesizers (played by Aguilar), drums and percussion (played by Manongo Mujica), with the addition of various Andean instruments (panpipes, charango, among others). It is a clear example of fusion of sound experimentation and timbres from the Andean world.

And finally Los constructores [The Builders] (1978), by director José Carlos Huayhuaca, a salsa which incorporates unusual sounds of tubular bells and prepared pianos.

About this diversity of genres, the composer says: “Creating film music gave me a wide perspective, because of the possibility of using all the composition techniques that I studied, both traditional and avant-garde, and even inventing some of my own, in addition to giving me the versatile craft that is needed”.

Ayahuasca: Music for Film by Luis David Aguilar (1978-1983) is the second album by Aguilar released by Buh Records, following the celebrated Hombres de Viento/Venas de la Tierra (1978-1982), appeared in 2015. The album is published in vinyl format, in a limited edition of 300 copies, as part of the Essentials Sounds collection. It includes a booklet with notes by Luis David Aguilar. The audio has been remastered from the original reel tapes by Aldo Montalvo. The artwork and design is by About Studio.

This project was awarded with the Economic Stimulus for Culture 2021 of the Ministry of Culture of Peru.

If you like Ayahuasca: Música para cine de Luis David Aguilar (1978-1983) {Essential Sounds collection}, you may also like: