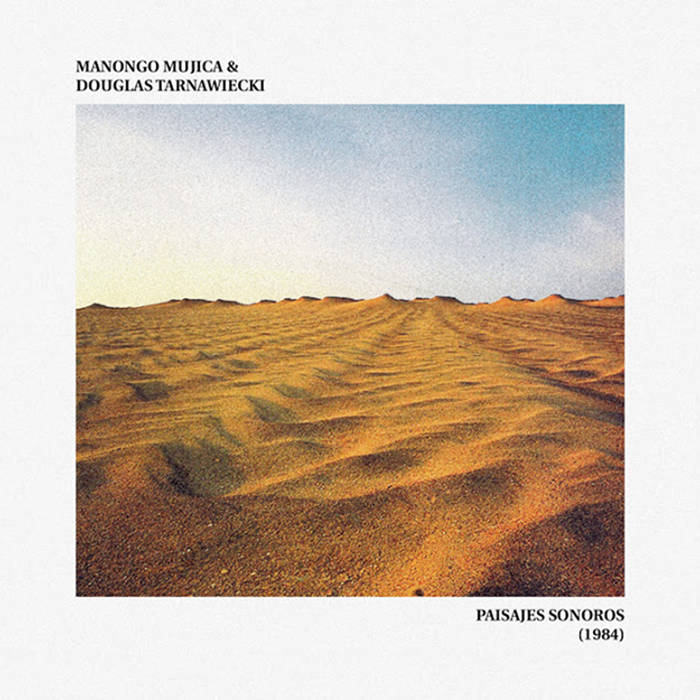 Finally reissued on CD by Buh Records in a limited edition of 300 copies. This CD is part of the Sounds Essentials Collection, a rescue project of several fundamental works of Peruvian Avantgarde music, which will be published periodically. The project is made possible through the support of VICERRECTORADO DE INVESTIGACIÓN, DE LA PONTIFICIA UNIVERSIDAD CATOLICA DEL PERÚ Y ALTA TECNOLOGÍA ANDINA (ATA)

“PAISAJES SONOROS” (SOUNDSCAPES) was published in 1984 independently as a cassette. It was the result of extensive research by Manongo Mujica and Douglas Tarnawiecki on Peruvian sounds. Throughout one year they traveled from the desert of Paracas to the Jungle visiting marketplaces and the heavily used avenues of Lima, recording the sounds of the sea, the wind, the rumor of streets and radio emissions. With all of this recorded archives they composed a soundtrack at Sandro Li- Rosi’s sound studio and on it they added a diversity of instruments, having a final result that spanned from ambient to drone to tribal, explorations of concrete music and collages that crisscrossed with personal proximities to an ethnic sound.

Douglas Tarnawiecki had met Manongo Mujica in 1982. Tarnawiecki came from the academic world and scholarly produced composition, having studied at Rochester and having worked doing research on diverse traditional musics of the world for a project in Greece. Meanwhile Manongo had been forming himself as a percussionist dedicated to improvisation and psychedelic rock, and had started an exploration, after his return to Lima in 1983, on tribal sonorities, drones, concrete sounds and those of a fluxus-conceptual type. The encounter of Manongo Mujica and the percussionist Julio Chocolate Algendones, mythical figure of Afro Peruvian music, was the trigger for Afro Peruvian sound and free improvisation to find their communion.

But Chocolate was, nevertheless, an atypical presence in the tradition of Afro Peruvian percussionists as he had lived both in Cuba and in Haiti and had become familiar with “santero” rites and rhythms which influenced a lot in his way of conceiving percussion. Thus the singularity of his sound; which deeply appealed to Manongo Mujica. They would be joined by Arturo Ruiz del Pozo, electronic composer who had studied in London who had begun his work within popular music.

This is why Paisajes Sonoros is also an encounter of four musicians from different origins who nevertheless had a common interest in exploring the relations between academic and pop, to find a shared area for native and cutting edge, all catalyzed by methods of free improvisation.

But “Paisajes Sonoros” also came to be at a moment when Peru was entering a social critical phase. The return of democracy with Fernando Belaunde Terry in 1980 brought alongside itself an inevitable transformation of the urban skyline: an informal economy emerged and an Andean cultural settled in the capital, as a result of the deep migrations from the country into the urban dwellings. By the ‘80s Lima was an overwhelmed city, deep in instability due to a severe economical crises and facing the presence of terrorist groups.

All of this new setting of Lima was the soundtrack which served as the backdrop of “Paisajes Sonoros”. But beyond having a documentary nature these sounds work as a psycho acoustic projection that dialogues with the musical sounds played. Interacting with the sounds of the surroundings is what is looked for, a sampling of reality, which is what it is, and which embodies itself with the musical setting, spreading the span of what listening is, to turn it into a creative activity. (Luis Alvarado)

Paisajes Sonoros is a musical research project risen from the necessity to listen to two different worlds simultaneously: our interior sound world and the external world that surrounds us. Both worlds posses different vibrational qualities.

Learning to hear the contradiction between these “worlds”, leads us then to perceive a “soundscape” (paisaje sonoro) which includes both opposites as the two faces of one being. A third element then comes to be: humor as a silent witness of a complex hearing process.

Behind each sound display there is one other, quieter, less visible, more subtle; maybe the unnamable sound of the origin, the landscape of the desert. Does it per chance have a musical equivalent?

Paisajes Sonoros tries to tell a story: the story of the origin, the development and death of sound as a main character: its relationship with nature, the occurrence of wind, water, rain, its entrance into the jungle and its later link with the city, our city of Lima with all of its contradiction and aural richness.

The concept of a soundscape appears when we let behind our prejudgments, our habit to judge music as something fixed and definable. Only then does every sonorous demonstration, all of our aural environment, from the most insignificant noises to the most everyday ones, take over another dimension, another sense, and become a means to feel the sound spectrum as a great living canvas, bringing us closer to noticing that other music which is present here now. (Manongo Mujica)