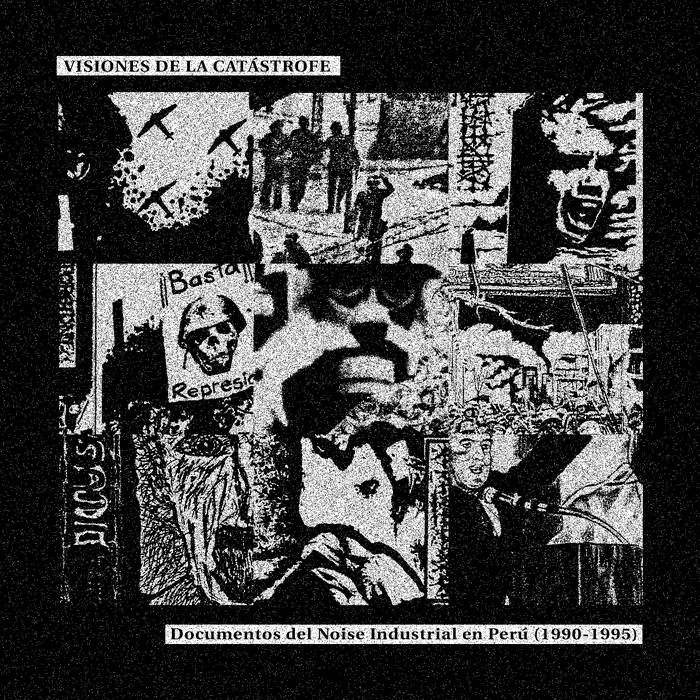 This CD is part of the Sounds Essentials Collection, a rescue project of several fundamental works of Peruvian Avantgarde music, which will be published periodically. The project is made possible through the support of VICERRECTORADO DE INVESTIGACIÓN, DE LA PONTIFICIA UNIVERSIDAD CATOLICA DEL PERÚ Y ALTA TECNOLOGÍA ANDINA (ATA)

VISIONS OF CATASTROPHE
Documentation on Industrial Noise in Peru (1990-1995)

In the mid ’80s a hardcore punk movement burst in Lima under the Movida de Rock Subterráneo moniker, meaning Underground Rock Movement. By the end of said decade the movement had diversified its musical options toward post punk, fusion, techno and noise. The political and social ecosystem in which that movement had developed was determined by a deep economical crises and a violent environment which had sunk the country into an insecure and chaotic condition as terrorist groups and the military clashed. Nihilism expressed in lyrics and the harsh and gutsy sound of many underground rock groups highly represented a generational feeling. The DO IT YOURSELF punk label was echoed by these youngsters who began to brood their own musical circuit. In a short time many demos and fanzines were published and self produced concerts were organized. As it had to be, punk had freed them from every rule and musical skill: what mattered was expressing oneself beyond skills. In no time many took a guitar and formed a band. Here we find the germ for what the small industrial noise movement in Peru shall be.

Those who would later be in charge of activating a noise circuit in Lima had previously been followers of the hardcore punk underground movement as well as the, as big or even bigger, parallel metal scene in its extreme versions. The international appearance of the album Scum (1987) by the English band Napalm Death had set ground for the surfacing of grindcore, a genre that consisted of rhythmic speeding up of hardcore and trash metal to unimaginable levels. Could you play faster and louder than that? Grindcore set the ground ablaze in the underground all over the world and it gave birth to grindnoise and noise core. Groups such as the Australians Seven Minutes Of Nausea were already blending speed with pure noise and they would become another referent to noise in Lima. It so just happens that the roar made itself heard loud and clear within the Underground Rock to then establish its own territory as proven by niche fanzines such as Ruido Mundial or Bulla Extrema. Groups such as Atrofia Cerebral, Audicion Irritable, Pulverized Necro Brain, Spasm, MDA, Obstruccion Intestinal, started this grind noise movement which, even though small, would have important ties with the international circuit, participating actively in the exchange of cassettes in the world networks.

It is precisely here that bands and projects become known, aesthetically connected with grindcore and noisecore groups, but soundwise far detached from any rock structure still reminiscent in these latter bands. Already speed added to low fi of a record such as Matanza Extrema by Atrofia Cerebral was a finding related to the levels of radicalism you could reach even in spite of technical disadvantages. The cover of the cassette case showed a killing in prison, an event that marked a terrible chapter in the internal war in Peru in which after a mutiny by prisoners accused of terrorism, more than 300 inmates lost their lives to the hands of the military.

And it is these tough events such as car bombs, curfews and assaults with the aftermath of military response (Which also established a climate of terror and human rights abuses) that filled pages in newspapers and turned into the bloody graphic imagery of a generation.

Odio by Audicion Irritable turned the wear and tear of sound into a fundamental element to generate a mass of noise where it was not possible to distinguish clearly the instruments played. The radicalism of grind by going as far as possible stimulated a group of teenagers to explore other kinds of other less conventional sonorities, closer to that utopia of music destruction which was the motto of the genre, represented by the symbol of a crossed out quaver note which needless to say was present on each demo or release connected with this movement. Rupture Chaotic by Phlegm parted from the guitar drum combination replacing it with electronic sequences at the same time intros were elongated in endless sound collage passages, a characteristic trait of these groups.

Artists such as Atresia, Distorsión Desequilibrada, Esperpento, Demencia Senil, Glaucoma, Sangama or Pestaudio come forward, leaping into pure noise. These artists of industrial noise (so they made themselves be called) were the result of the radicalism to which the grind and metal scenes had arrived. It is not gratuitous that the surge coincides with the end of the underground rock movement as in some way the artists of industrial noise were the representation of the non acceptance of any musical value and the symbol of the atomization to which the underground movement had itself arrived. Curiously enough none of these artists played live, these were projects basically conceived to be recorded, to be heard in solitude.

Ataque sensorial auditivo was the title of the first demo by Distorsión Desequilibrada, a project by Álvaro Portales which was released on April 1991. In the inner sleeve of the cassette box one could read: “In the hands of a sinester police squad”. Undoubtedly the use of noise to extreme levels could connect them with an entire Japanese noise tradition. Needless to say in locals fanzines of those times one could read about artists such as KK Null, The Gerogerigegege or Merzbow, who in their turn had links to the sound of grindcore and metal and the generation of industrial artists known as power electronics. But it wasn’t only a bond to the new wave of international industrial noise that moved local noise artists, for the local movement noise was a form of showing their dissatisfaction, and differently from preceding hardcore punk, it was the abstract, irrationality, and pure noise where they found their expressive achievements, the incarnation of a sound blast, a depiction of the day to day state of alert.

Every tool that generated sound could be used, pondering the lack of professional equipment or electronic instruments which were inaccessible. Alvaro Portales wrote back then in a manifest on the possibility of “exploiting objects for a hearing purpose”. Thus in the recordings we find radio and television signal processing, throaty voices, feedbacks, generation of sound with any imaginable domestic artifact, vinyl and cassette tape collages, banging on metals. There were no limits to their search for radicalism. P.A.M. (Anti Music Project for its initials in Spanish) signed by Miguel Tipacti (Atrofia Cerebral, Esperpento) was one of many experiments which were so radical they wound up as eccentricities (and why not a geniality): it consisted of a cassette tape with three minutes of silence, to demonstrate the total destruction of music. Guitarist Edgar Umeres (member of the metal band Hadez) based his Glaucoma on guitar feedback and effects to create masses of noise in an insane encounter between Metal Machine Music by Lou Reed and grind sound. Demencia Senil by Christian Bernedo was the find of noise in any possible source: shouts, bangs, out of control toys, overloaded recordings, etc.

It is with Sangama that the atmospheric environments intuited by Glaucoma, Distorsión Desequilibrada, Pestaudio and Esperpento take total control. The ambient industrial sound begins with Sangama in Peru. A visceral position and sound violence give way to introspection and a state of trance. Sangama made itself known with a compilation called Infamia which was released in 1997 and in which artists such as Maximum Terrorem, Pychulator and Insumisión also participated. The first two also included tracks in Estudios Embriológicos de Deformaciones, a compilation released that same year. Jardín Vértigo, Inversor Demente, Sadomasters, Jardín also make themselves known at this time. Post industrial and isolationism had arrived in Lima at the same time and experimental electronic music scene had strongly made itself present. But that is another story.

Industrial noise in Peru goes from 1990 to 1995 and it was part of a major grindcore movement. It was the arrival of a musical genre where visceral positions, amateurism, and complete disregard of melody took these artists to explore extreme sonorities by opening themselves completely to experimentation. More than twenty years later we see a compilation of those projects in a CD which gives count not only of an original sound but also serving as a testimony of a critical moment. (Luis Alvarado).

This CD is part of the Sounds Essentials Collection, a rescue project of several fundamental works of Peruvian Avantgarde music.