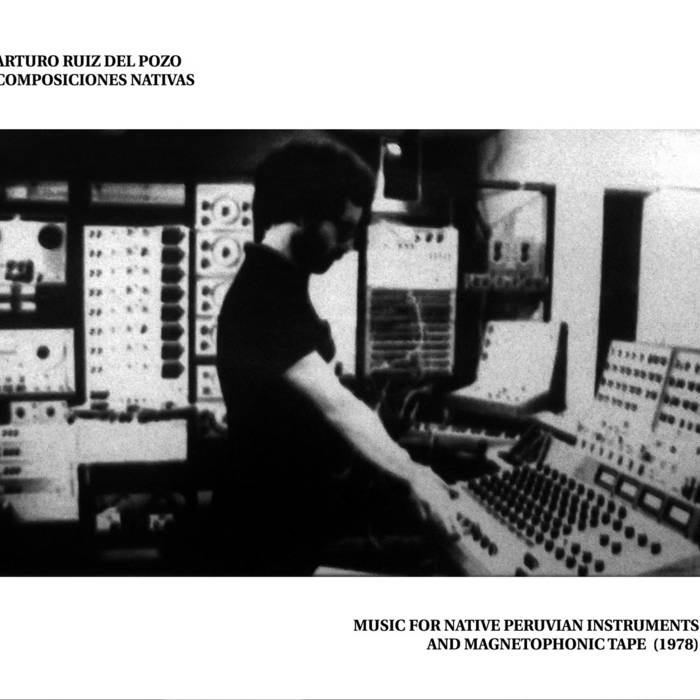 By the end of the 1970s, a new generation of musicians who brought together ancestral and forefront, became visible in Lima as they searched for native sounds and the new tools of technology. Amongst them, we find Arturo Ruiz Del Pozo, composer who studied with Edgar Valcárcel. After studying at the National Conservatory in Lima he traveled to London in 1976 to register himself at the Royal College of Music where he took a master's degree in electronic composition. Ruiz Del Pozo had left Lima with a bag full of Peruvian native instruments with the idea of utilizing them in his future compositions. In London he was taught by Lawrence Casserly, one the prominent figures of Britain's electro acoustic composition; a musician who was fascinated by the interaction of instruments and electronic media way back from the times of his fundamental audiovisual experimentation group Hydra. Ruiz del Pozo utilized a series of concrete music resources learnt from Casserly. Based on sounds that came from native instruments and diverse manipulations to which these sounds were subject of, he obtained textures and sonorities, which, at the same time they invoked rituals, they opened a new field of experimentation; a collage of sounds of Andean reminiscence, echoes and abstractions, which will entrance you an unprecedented sound universe. These recordings were named Native Compositions (Composiciones Nativas) and they were released in a cassette tape format in 1984 by the author himself. More than 30 years later Buh Records rescued these recordings to inaugurate its Essential Sounds Collection, dedicated to publishing strange and fascinating artifacts of Peruvian experimental music of this period, in a CD edition (2015), which was quickly sold out. Now the label presents its first release on vinyl.

Finally reissued on CD by Buh Records in a limited edition of 300 copies. This CD is part of the Sounds Essentials Collection, a rescue project of several fundamental works of Peruvian Avantgarde music, which will be published periodically. The project is made possible through the support of ATA (Alta Tecnología Andina)
Available in record stores and through web Buh Records.

Music for Native Peruvian instruments and Magnetophonic Tape created in the Electronic Music Studio of the Royal College of Music of the University of London between 1976 and 1978. Was part of the Portfolio of Compositions required by the Faculty of Music where, having passed the prescribed examinations, Arturo graduated as MASTER OF MUSIC in Composition, Professional Degree awarded on 18 October 1978.

Arturo Ruiz del Pozo composed each work as an independent and different sound texture from the others by the characteristic timbres of each native instrument executed properly.
For example in PARANTARA develops a blown melodic and harmonic tissue with Sikus (Zampoñas or Pan Flutes), while in LAKE OF TOTORAS also uses Sikus but rubbed.
A sample of creative freedom is TAKEOFF, where Ruiz del Pozo sums and merges all previous works by playing them at full speed generating a multiple White Sound crescendo ending in sudden silence.

The expressive character of NATIVE COMPOSITIONS, while being own and unique in the development of each work, can be defined as relaxing because the set of works conveys a meditative state of consciousness that brings us to the longing for inner peace so important and necessary in our lives.

By the encounter of the special sonority of Native Peruvian Instruments with academic techniques of musical composition at that time (management, development and process of sound elements physical and specifically recorded at tape), NATIVE COMPOSITIONS achieves a unique result in form, style, and artistic expression; driving us to a contemplative state of the amazement of existence.


The first edition of NATIVE COMPOSITIONS was published in cassette in 1984. It was a summary of five works: "Estudio para quena" "Lago de totoras" "Despegue" "Noche Ashaninka" y "Selvinas" The durations of these works in that edition differ of those at the CD 2014. The original material recorded on magnetophonic tape was
transferred to digital file, with the valuable help of our friend Carlos Vasquez. Then it was mastered with professional audio programs. The CD contains seven works. Does not include "Noche Ashaninka".