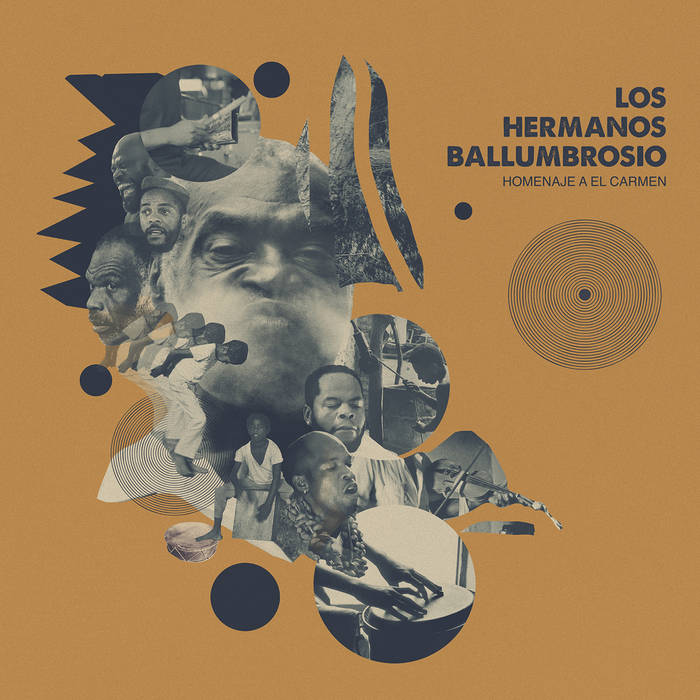 Los Hermanos Ballumbrosio is one of the most emblematic ensembles of Afro-Peruvian music, however, until now, no single recording has been able to portray the essence of the group. “Homenaje a El Carmen” (“Homage to El Carmen”), their debut album for Buh Records, hits the
mark: it captures the true spirit of the musical tradition of El Carmen, a town a few miles south of Lima, home to the largest black community in Peru. Songs based on percussion and zapateo bring back the memories and experiences of a culture that has produced one of the
greatest treasures of Peruvian music.

“Few families in the history of Peruvian popular music are as distinguished as the Ballumbrosio family. The legacy left by Don Amador Ballumbrosio Mosquera, a mythical figure in Afro-Peruvian culture, shines like an incandescent light. For those of us who had the privilege of knowing him –of watching and listening to him tap his feet or play the violin and transmit its magic and its human quality–, this album is about the remembrance of his legacy. But it is his children, the Ballumbrosio brothers: Chebo, Miguel, Camilo, Roberto and Pudy, to whom we owe the extraordinary achievement of having sustained the integrity of the tradition of the sound of El Carmen.” says Manongo Mujica, producer of the álbum.
Members of one of the main families of El Carmen, Chincha, a cotton-producing province located 200 km south of Lima and known for hosting the largest black community in Peru, the Ballumbrosio brothers are the heirs of a great cultural tradition, embodied in the figure and teachings of their father Amador Ballumbrosio Mosquera, as well as their mother Adelina Guadalupe de Ballumbrosio. The patriarch of the family was an icon of Afro-Peruvian musical culture, a violinist, a performer of zapateo (a local type of tap dance) and, for a long time, a leading exponent of the “Danza de Negritos” (also known as "Hatajo de Negritos"), a traditional religious dance that is part of the UNESCO List of Intangible Cultural Heritage of Humanity. Amador and Adelina had fifteen children, all of them heirs and practitioners of the Afro-Peruvian tradition who became great cultural ambassadors of El Carmen by turning their family house into a pilgrimage site for visitors in town. Hence, the Ballumbrosio brothers cultivated music from a very young age, training as percussionists and in particular as virtuosos of Afro-Peruvian zapateo, which constitutes a fundamental element of the "Hatajo de Negritos". Currently, the Ballumbrosio brothers are made up of Chebo, Miguel, Roberto, Camilo and Pudy Ballumbrosio, all of them with a recognized individual career in various groups and solo projects.
"Homage to El Carmen", the third volume of the series "Perspectives on Afro-Peruvian Music", signals the return of the group to the recording studio, and also to the sources of rhythms such as festejo and panalivio, which they interpret with cajón, quijada (jawbone), congas, bongo and batá. The result is a distillation and a testimony of the memories and experiences that portray the cultural universe of El Carmen. We have access to a selection of traditional songs that are heard during the festivities, such as “Guanchivalito”, which is played during the Yunza Negra, a ceremony in which a willow tree is cut to bring benefits to the community. "Panalivio " and "Serrana Viejad" are two traditional Christmas carols that are played in the "Hatajo de Negritos" and which reflect the syncretic character of the Afro-Peruvian culture. These songs speak of the difficulties of rural life, but they also serve as a vehicle to demonstrate the Ballumbrosio brother's mastery in the art of zapateo, a dance that is accompanied by violin and bells. The classic “La Esquina de El Carmen” is perhaps the song that best expresses the erotic character of festejo, also known as baile de cintura (waist dance).

The CD version includes two more tracks: "Lucio Cotito", composed by Antonio Gálvez Ronceros, and "Vamos a la Pampa". They are an essential part of the Ballumbrosios’ repertoire and they deal with the subject of slavery and liberation of the African descendants in Peru.

"Homage to El Carmen" is the highly anticipated return of the Ballumbrosio brothers to the recording studio. They have become indisputable references of Afro-Peruvian music and have displayed their sound and dances around the world. It was time for an album that portrays the essence of the group: a collective spirit, where the tutelary image of Amador Ballumbrosio always shines, and which traces a history from Africa to El Carmen.

If you like Homenaje a El Carmen (Perspectives on Afro​-​Peruvian Music. The Collection Vol 3), you may also like: