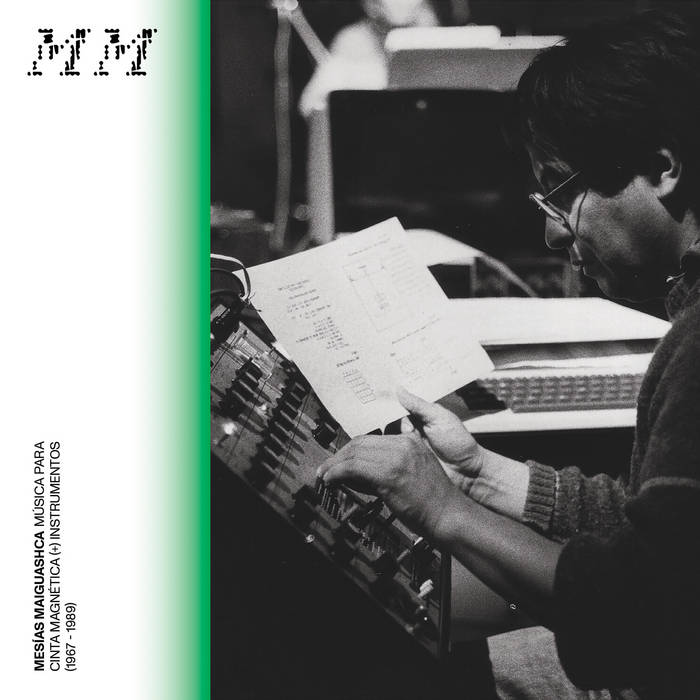 Mesías Maiguashca is a relevant figure on the map of contemporary avant-garde composers. Born in Ecuador but currently based in Germany, he has been a composer who, since the 60s, would constantly expand his possibilities in fields such as electronic music (where he stands out as a pioneer), mixed works, expanded interdisciplinary pieces and the creation of unconventional instruments, where the encounter between his country of origin’s popular folkloric tradition and the new European music has produced a universe of tension, as fascinating as it is startling.

Mesías Maiguashca: Música para cinta magnética (+) instrumentos (1967-1989) presents for the first time a sample of the essential work of Maiguashca, covering a period that goes from 1967 to 1989. This is the first of a new collection, a new series of albums that seeks to document the extensive recorded work of Maiguashca, with pieces that date from the mid-60s to the present. This first release is a good introduction to understand the various aesthetic options developed by the artist throughout his career. It includes his historical pieces of electronic music, such as "El mundo en que vivimos" (1967) or "Ayayayayay"(1971), which are early references for electronic music in Latin America, and also mixed pieces, such as "Intensidad y altura" (1979) for six percussionists and magnetic tape, "The wings of perception" (1989) for a string quartet and tape, and "Nemos Orgel" (1989) for organ and magnetic tape.

As the critic Fabiano Kueva has pointed out: “During six decades of musical creation, Maiguashca has outlined diverse aesthetic axes, raising questions about the aural experience and generating a sound flow, a permanent oscillation between Latin America and Europe. Therefore, the blend of Western and non-Western concepts, techniques and timbres, the literary references or the historical approach are perceived as a complex gesture that reveals the tensions, the memories, the place of the artist.”

Mesías Maiguashca studied at the Quito Conservatory, the Eastman School of Music (Rochester, N.Y.), the Di Tella Institute (Buenos Aires) and the Musikhochschule Köln (Cologne). He has made recordings at the WDR music studio (Cologne), Center Européen pour la Recherche Musicale (Metz), the IRCAM (Paris), the Acroe (Grenoble) and the ZKM (Karlsruhe). In 1988, together with Roland Breitenfeld, he founded the K.O.Studio Freiburg, a private initiative for the cultivation of experimental music. He has been living in Freiburg since 1996.

Mesías Maiguashca: Música para cinta magnética (+) instrumentos (1967-1989) is released as a double vinyl LP, in a limited edition of 300 copies, including photos and detailed information on the pieces. Liner notes by Mesías Maiguashca and Fabiano Kueva. Mastering: Alberto Cendra at Garden Lab Audio. Desing by Martín Escalante. Project carried out thanks to the Ibermúsicas fund.