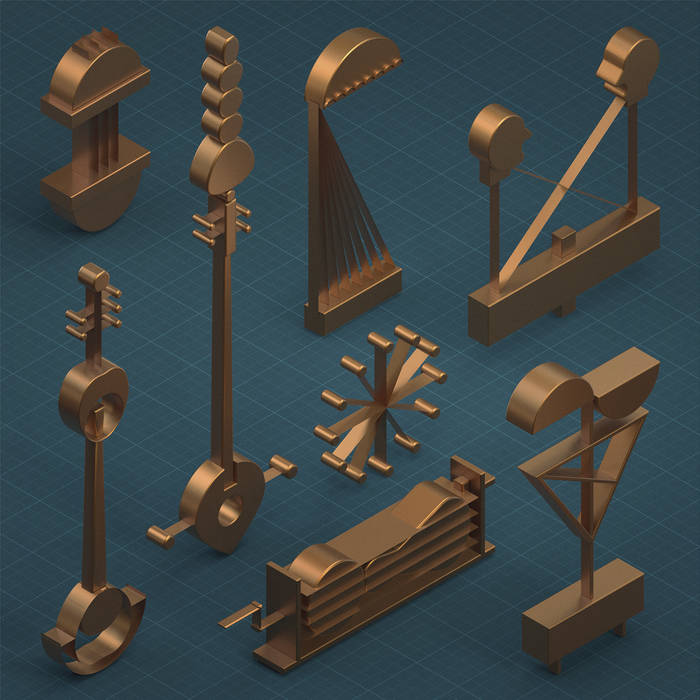 Objetos Musicais is a collection of 13 sound pieces created by artists from South America and Switzerland, who work in an intermediate zone among the craft of luthiers, visual arts and experimental music. Their works evoke the visionary ideas of Walter Smetak, a Swiss composer who lived in Salvador, Bahia (Brazil). Smetak was a pioneer of musical experimentation in that country and developed, in the 60s and 70s, a musical poetics that was captured in two seminal albums, Smetak (1974) and Interregno (1980), both of which, after being out of print for a long time, have been reissued today, hence the motivation for this tribute. On those two albums, Smetak combined Afro-Brazilian ritual traditions, theosophy, microtonality studies, collective improvisation and the use of unconventional musical instruments, which he called Plasticas Sonoras. Smetak came to build around 150 acoustic instruments, many of which are true sound sculptures of great visual impact. This latter aspect is the most directly evoked one on this album—and it so happens that the Smetakian spirit tunes in with a new community of contemporary artists, who relate to the work of the so-called "experimental luthiers", artists who build their own instruments (Marco Scarassatti, Philipp Läng, Maria Anália), lead them towards radical extended versions (Rubén D'Hers, Claudio Merlet), develop hybrid projects involving instruments and sound sculpture (Javier Bustos, Álvaro Icaza and Verónica Luyo, Juan Pablo Egúsquiza, Edgardo Rudnitzky) or take the exploration towards the building of resonant machines (Nicole L'Huillier, Zimoun, Cod.Act, O Grivo), without these categories being mutually exclusive, but rather tending to mix, thereby opening up new sonic possibilities.
This new community of artists has begun to create a whole new field of research and, in a way, a new discipline, understandable within the context of this new paradigm opened by the maker culture, which has pushed creators and developers from all over the world to conceive alternative—anti-hegemonic and DIY—forms of production. Therefore, this collection allows the artists to evoke Walter Smetak but also to connect his work to this new scene—to which it precedes—a link for this new art that makes its way at some point among the work of experimental luthiers, sound art, experimental music and the DIY ethics.

This project is part of the experimental music and sound art platform Incidencias Sonoras: COINCIDENCIA, by the Swiss Arts Council Pro Helvetia.


01- Maria Anália - O mar (2:57) (Brazil)
A fictional and fantastic sound space: O mar.
A boat sails through a storm in a sea of sonic possibilities.
The piece composed and performed by Maria Anália has varied tones of the instruments built and created by the author and explores the sonic possibilities of a diversity of life and sounds.

Although the name of the piece induces listeners to look for some resemblance to the sound of the sea we are used to, O mar proposes an active and imaginative listening to what this sea would be like… is it a sea?
Instruments used: Ronda, Canoello, Roda, Mono, Buffer, Garlimba, Coif Plate, Fire Drum and Kora.
soundcloud.com/analiamaria

03- Philipp Läng - Small piece with Walfisch and Autodrum (3:10) (Suiza)
Improvisation with Walfisch and Autodrum - no overdubs, special effects, or artificial reverb. The “Walfisch” is an instrument made of a nylon string, a steel spring, and a drum. It’s played with wet fingers, producing a wide range of sounds which can be surprisingly loud. The “Autodrum” is made from three drums arranged in a triangle and a ventilator that flings soft rubber balls onto the drumheads in an arbitrary rhythm.
www.merkstatt.ch


04- Marco Scarassatti - Ọ̀bẹ (3:05) (Brazil)
For pássaro-cocho
Recording: Marco Scarassatti
Mastering: Nelson Pinton
Ọ̀bẹ is inspired by an Ìtàn (story) of Odù Ifá, a divinatory system from the Yoruba tradition, and tells the story of a knife that learned to dance among the rocks to stay sharp.
In this piece of music made for this invented instrument, which is based on a viola de cocho, a traditional instrument from the Brazilian Midwest, I tried to explore with the friction of the bow on the strings, in order to create a shrill and microtonal dance as if it were a sharp knife among the rocks. The pássaro-cocho (cocho bird) is inspired by Walter Smetak’s stringed instruments.
soundcloud.com/marco_scarassatti


05- Claudio Merlet - Icaro (3:00) (Chile)
Composed and performed by Claudio Merlet. Recording, mixing and mastering: Juan Pablo Quezada at Santuario Sónico.
Icaro is a work that mainly seeks to show some essential characteristics of the instrument (Salterio Extendido [Extended Psaltery] - 2016). Emphasizing, for instance, its long-range mechatronic speed control (0 to 1000 RPM). Providing the possibility of interaction between particular and oscillatory periodic rhythms, which are combined individually and can be unified in a cumulative polyrhythmic global structure, in addition to the option of a wide micro-polyphonic development, combining up to 12 strings independently, with ascending or descending speeds and with an exponential, linear or abrupt nature.
claudiomerlet.com


06- Cod.Act - Cycloïd-E (3:22) (Suiza)
Cycloïd-E is a horizontal pendulum that rotates freely. It is composed of five metallic tubes equipped with sensors and loudspeakers. Similar to the movements, the music is harmonic. It is based on a spectral system that builds, develops, increases and reduces spectral tones in relation with the
movements of the sculpture. Short musical phrases played with acoustic instruments were first analyzed, then oscillators play these values to reconstitute dynamically the original sounds.
codact.ch

01- O Grivo - Móbil (3:00) (Brazil)
In 2020, O Grivo built a series of small machines. Its engines cause small objects to hit and scrape steel sheets and other metallic and wooden surfaces, producing a range of sounds that is very wide at the timbral level—this is also caused by the rotation of the engines, pulses and cadences with different rhythmic characteristics.
The indeterminacy that permeates both the timbre and the rhythm of the machines—caused by the way they are built—has a central importance in the particularity of each one.
For Móbil, each machine was recorded separately. The two musicians, also separately, were creating excerpts and exchanging them until their overlap produced the desired multitimbral and polyrhythmic result.
www.ogrivo.com

02-Nicole L'Huillier – Escucha para Acelerador de Partículas, PARANCATADORA y voz (2:34) (Chile)
This piece comes from a listening ritual at CERN, inside the LHC ALICE Detector where the space interacted with La PARACANTORA, and improvised voice.
La PARACANTORA is a traveling sonic sculpture that offers a concert for a specific moment in space and time. She is a transductive artifact, a techno shamanic parasite that through environmental sensing, real-time mapping, and six speakers, offers a listening ritual of the place. The performances have been hosted in different places where the natural and technological collide, where there are particular disturbances enveloping us. Shake your material existence and let this parasitic medium sensitize you through the aural and guide you through an exercise of listening to emerge together, stimulate perception, and confuse reality.
*PARACANTORA: Parasito Ambiental Ruidoso Amplificador Canalizador de Agentes Ninguneados Transducidos Ofreciendo Rituales Auditivos
nicolelhuillier.com


03- Edgardo Rudnitzky - Música Nocturna
Música Nocturna is a sound dance by candlelight, an improvised "trio" between two installations and one musician.
Nocturno is an installation composed of seven monochords with their mechanisms, which work powered by the heat of the candles. Border Music is a kind of carillon activated by barbed wire loops that are permanently transiting around.
The piece begins with the monochords played with my hands and drumsticks—the mechanisms of Nocturno that hit the strings are incorporated, and Border Music is finally activated, leaving the installations alone as a duo.
www.rudni.com

04- Álvaro Icaza and Verónica Luyo - Tripa con dientes (2:49) (Peru)
The instruments used in Tripa con dientes are kinetic devices and resonant objects. These are assembled with various materials, elements found and others designed based on their acoustic characteristics. In them, we have sought that the sound define the form. Texture, tension, concavity, thickness, volume, weight, friction, frequency and empty space as an amplifier are aspects that come into play when activated.
alvaroicaza.com
cargocollective.com/veronicaluyo

05- Juan Pablo Egúsquiza - Uma Isis Esfera (3:00) (Peru)
Composition that presents a sensory journey through an energetic force that is increasing, generating tension and sound explosions while orbiting through space. It was inspired by the work of Walter Smetak. The piece was created with recordings from Screamer Satélite, a sound sculpture built as an artistic residency project in Backsteinboot, Berlin, in March 2020. Metal sheets, threaded rods, springs and reused wood were used to build it, and it is driven in a percussive way and with a rubbed bow.
www.jpabloegusquiza.com

06- Javier Bustos - Aerodrones (3:00) (Argentina)
Aerodrones is an experimental performance and instrument that is part of the series Cómo interpretar el viento by Javier Bustos. The instrument is made up of an interconnected group of membrane resonators built with transparent hoses. It is operated through a bellows that collects the air in balloons, with a valve system activating each resonator. It is a polyphonic wind instrument the timbral result of which is similar to a choir of ships. (2014)
javierbustos.com.ar

07-Zimoun - 1 prepared dc-motor, 1 mdf wheel, touch fasterner, mdf box 25x25x9cm (2:54) (Suiza)
The recording is based on the sounds of a sound sculpture, which produces sounds through Velcro by means of a mechanical system.
www.zimoun.net