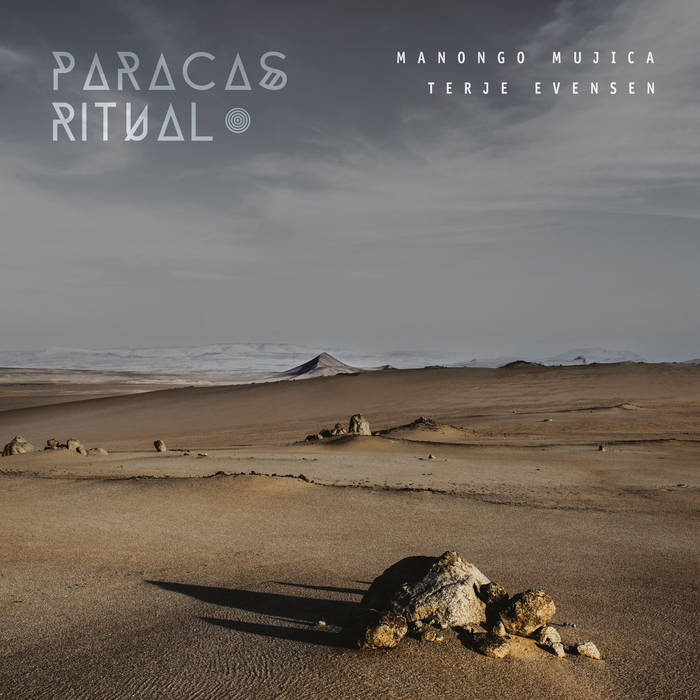 Manongo Mujica is a Peruvian percussionist, composer and visual artist. His constant search for sounds, from native to electronic, has even led him to compose music from silence. Norway’s Terje Evensen specialises in improvised modern jazz combined with electronic elements, creating spacious and dramatic soundscapes of profound intensity.

Paracas Ritual, the new album by Manongo Mujica and Terje Evensen, is the result of an investigation carried out by the duo in the desert and bay of Paracas, south of Lima, on the Peruvian coast. Long days of deep listening and recordings of sounds from the desert and the bay have served as material and inspiration for this first collaborative project. The album also includes photographs of the Paracas landscapes made by Pauline Barberi and paintings by Manongo himself, also inspired by these landscapes, which were in turn the result of a previous visual project and which have served as a point of reference and complement.

The visual is one of the affinities between Mujica and Evensen. In their artistic careers, they both have shown an interest in exploring the worlds of synesthesia, in the idea of listening to images and in using sounds as pictorial material. Hence, listening to the desert is here also a way of listening to the visual field of the landscape, turning it into an acoustic impression of the mind. And Paracas Ritual is composed of those impressions.

The four pieces that make up the album show a diversity of explorations that combine electronic sounds, field recordings and the use of a wide variety of percussion instruments, whose complex montage and narrativity generate compositions in the manner of a soundtrack.

Paracas Ritual is a blend of ambient, sound art, meditative percussion music, free improvisation and jazz. It is, therefore, an ambitious album that courses through a wide range of languages, but it is precisely in its voracious search that it manages to venture into unknown sound terrain, as abstract and dissonant as it is melodic and rhythmic. And as much as it reminisces about Paracas, it also reflects on the musical creative act that is defined here as an encounter between the time of listening and the time of making sounds.

Paracas Ritual (BR132) is released through Buh Records in digital and a limited double LP vinyl edition of 300 copies. Cover image is a pic by Pauline Barberi. Album includes booklet of 12 pages with photos and liner notes.

Percussionist, composer and visual artist. Manuel Antonio Mujica Pinilla, “Manongo”, was born in Lima in 1950. He studied in Vienna with Klaus Stein and joined the rock band The Mad’s, with whom he recorded four songs in the Rolling Stone’s studio in London. He went back to Lima in 1973, formed an ensamble with Susana Baca, played with the National Symphony Orchestra in an Enrique Pinilla production, performed also with Omar Aramayo and Corina Bartra and composed incidental music for Rafael Hastings videos. He founded “Solos” with Enrique Luna, “Nocturno” with Omar Aramayo and Arturo Ruiz del Pozo. With Douglas Tarnawiecki he recorded the album “Paisajes Sonoros” in 1984, focused on sound experimentation. In 1984 he also founded the “Manongo Mujica Quartet” which would be later known as Perujazz, the first band connecting Peruvian rhythms to jazz. Parallel to his work with Perujazz, Manongo recorded several albums: Mundos (1989), Canto a Bernardo (1992), Tribal (1996), El sonido de los dioses (2004) and Cambio de Piel (2012). He presented “Zona Neblina: El sonido de los sueños” (1990). In 2011 he released his first audiovisual work, the experimental film “Autorretrato Sonoro” (Self-Portrait Sound), a tribute to the Peruvian desert. His most recent works include “Huaca Sonora” (2015), which complies seven albums and two videos, recorded between 1991 and 2014 as a “search for the sacred in music, totally forgotten.” This compilation was highlighted in the British magazine The Wire. His most recent production “Maya Sonora” (2016), has the drummer as the protagonist and invites us to open a sound dimension towards “the inaudible”. In 2018 he presented “Gitanería”, an audiovisual show that integrates photography with different percussion instruments and a cello. He has musicalized numerous films and television programs. His constant search of sounds, from native to electronic, has even led him to compose music from silence. He is one of the most representative percussion improvisers and a major avant-garde Peruvian artist. Manongo Mujica has collaborated with artists such as Terje Evensen, Acid Mothers Temple, Richard Pinhas, João Pais Filipe, Alan Courtis, Martin Joseph, etc.

Evensen is a specialist in improvised modern jazz music combined with electro elements. He is adept in working with acoustic samples/recordings and mixing them together on an electro palette. He is always experimenting within a wonderland where different genres cross over – where jazz meets ambient, and electronica – creating spacious and dramatic soundscapes of profound intensity.

Although well versed in many styles and genres Evensen’s solo album Still you. You still here (2010) is a quintessential example of the core of his work, consisting purely of percussion and electronics. Released on the Berlin based platform FONORUM, it was the world’s very first net-album. www.stillyou-youstillhere.com

Touring: The people of Peru and Japan, United Kingdom, Germany, Italy, Chile, New Zealand, and Norway have been lucky enough to hear him play live.